You can find on this page the Turkey region map to print and to download in PDF. The Turkey political map presents states, regions, provinces and surrounding areas of Turkey in Asia.
The different regions of Turkey offer endless possibilities all year round. Each region as its mentioned in Turkey region map has its own personality, history, landscape and even cuisine, and with so much on offer to visitors it is not surprising that one trip to Turkey is never enough. 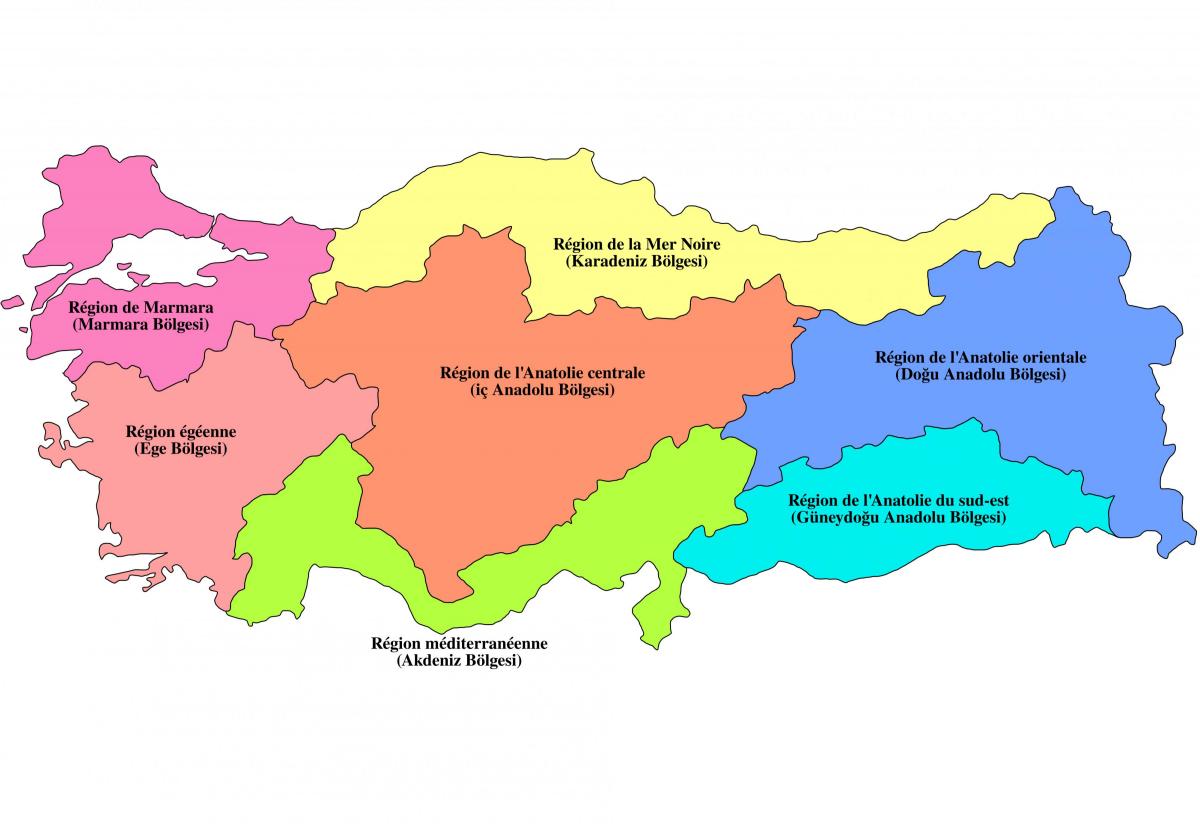 The first Geography Congress held in Ankara between 6-21 June 1941 divided Turkey into seven regions after long discussions and work. These geographical regions as you can see in Turkey regions map were separated according to their climate, location, fauna and the flora, human habitat, agricultural diversities, transportation, topography and so on. At the end, 4 side regions and 3 inner regions were named according to their neighborhood to the four seas Turkey and positions in Anatolia. Most of the cities borders are within the territory of a single region, but sometimes can be within two, even three regions (such as Sivas, Afyon, Kahramanmaras). Approximate Real land occupied by the regions within the total of Turkey whole territory, based on (approximately) Real 814,000 km2 considering the topographical formations instead of Projected 780,500 km2 (301,353 square miles)

Sitting in north-west Turkey, the Marmara region as its shown in Turkey regions map includes Istanbul, the country largest, most populated and busiest city. Neighboured by the Aegean region to the south, black sea to the east and bordered by Greece and Bulgaria, residents also enjoy the gorgeous Aegean and Marmara seas. With the longest coastline, Aegean Region garners its name from the Aegean Sea. Three central provinces; Aydin, Izmir and Mugla stand out as strong performers for travellers and expats living and buying property in Turkey. Covering the entire southern coast, the Mediterranean region is Turkey success story. Excelling in all areas of life, it makes a roaring trade in tourism, foreign real estate, education, and general business. Covering just over 59,000 square kilometres, in history, the southern Anatolian region sat on the edge of Mesopotamia, of which some say was the birthplace of civilisations.

Covering the entire north coast, the Black Sea region is Turkey rising star. For decades, while the south and west of the country developed thriving tourism and real estate industries, the Black Sea stayed off the grid. In the heart of the country, the central Anatolian region as its mentioned in Turkey regions map has many attributes to boast about. First, the government reigns supreme from Ankara, the capital. Secondly many Turks highly respect the Anitkabir, holding the tomb of Mustafa Kemal Ataturk who founded the Republic. Consisting of most of eastern Turkey, Eastern Anatolian region is not popular on the mainstream foreign travel industry, yet over the last decade, Turks have taken a more substantial interest in exploring the flat plains bordering Iraq, Iran, Azerbaijan, Armenian and Georgia. 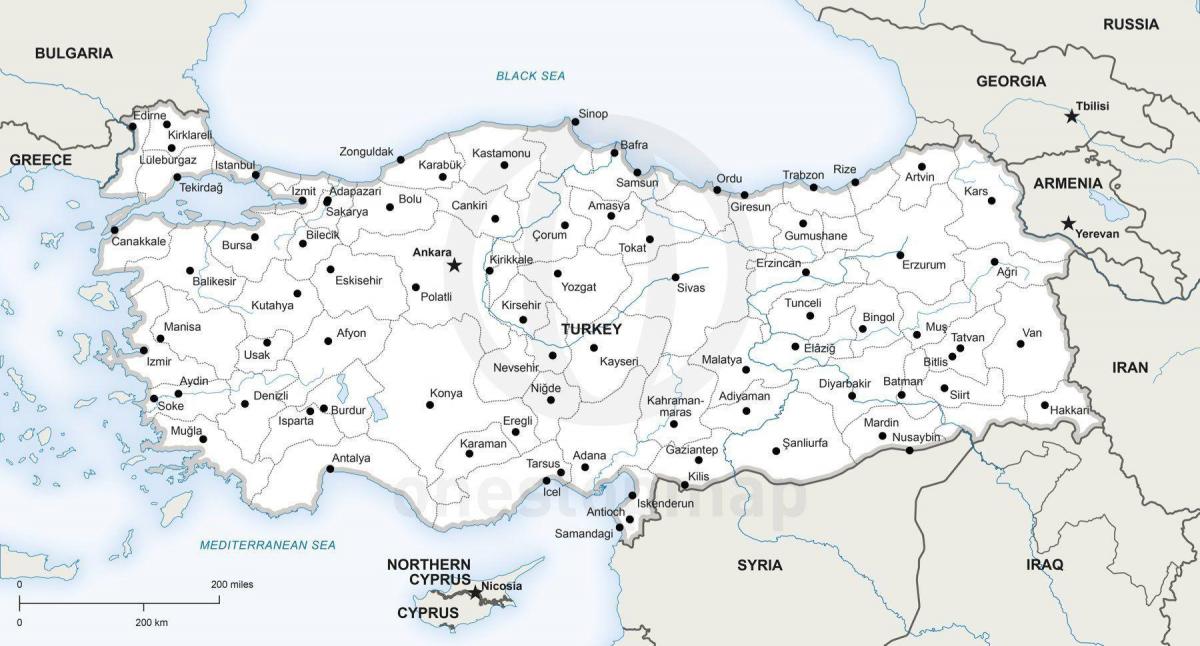 Politics of Turkey takes place in a framework of a strictly secular parliamentary representative democratic republic, whereby the Prime Minister of Turkey is the head of government, and of a multi-party system. The President of Turkey is the head of state who holds a largely ceremonial role but with substantial reserve powers. Turkey political system is based on a separation of powers as its shown in Turkey political map. Executive power is exercised by the Council of Ministers. Legislative power is vested in the Grand National Assembly of Turkey. The judiciary is independent of the executive and the legislature. Its current constitution was adopted on 7 November 1982 after the Turkish constitutional referendum.

The Turkish Constitution and most mainstream political parties are built on the following principles as its mentioned in Turkey political map: Kemalism, Laicism, Modernization. Other political ideas have also influenced Turkish politics and modern history. Of particular importance are: Conservatism, Neo-liberalism, Islamism, Pan-Turkism, Socialism, Communism, Anarchism. These principles are the continuum around which various – and often rapidly changing – political parties and groups have campaigned (and sometimes fought). On a superficial level, the importance which state officials attach to these principles and their posts can be seen in their response to breaches of protocol in official ceremonies.

Turkey is a parliamentary democracy with a multi-party system. Major parties as you can see in Turkey political map are defined as political parties that received more than 10% of the votes in the latest general election (22 July 2007) and/or represented in parliament. Minor parties are defined as political parties that have fulfilled the requirements of the Supreme Election Committee (Yüksek Seçim Kurulu in Turkish, abbreviated as YSK) and whose names have been listed on ballots.

Turkey is divided into 81 states as its shown in Turkey states map, called il in Turkish (plural is iller, see Turkish alphabet for capitalization of i). The states are divided into a number of different districts. Each state has a government area (il merkezi) in the central district (merkez ilçe), and may include other districts (ilçe singular, ilçeler plural). In all but three cases, the government area bears the same name as the state. The exceptions are Antakya (in Hatay), Izmit (in Kocaeli) and Adapazari (in Sakarya). A state is administered by an appointed governor (vali), and was formerly termed a "governorate" (vilayet).